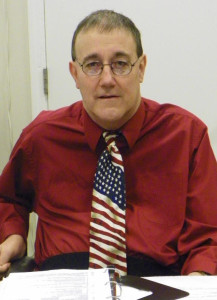 I was in the final draft in 1972 so I decided to enlist in the U.S. Navy Reserves. I attended Storekeeper “A” School in San Diego, California then reported for active duty in June 1973 serving in the supply department issuing supplies, ultimately serving as the Financial Manager of the Supply Department on the USS Dale (DLG-19). I was discharged from active duty to my U.S. Navy Reserve Center in Pittsburgh in June 1975. Upon discharge from active I had advanced to the rank of Storekeeper 2nd Class and remained in the reserves for two more years.

On April 1, 1985 I fell from a roof and sustained a C-4, C-5 incomplete injury which left me a quadriplegic. In February 1989 after a long rehabilitation, I decided to get a baclofen pump to control my spasms. Since I received the pump, I have been able to drive an equipped van.

I graduated from the Butler Community College with an Associate’s Degree in Accounting in 1990. While attending College I volunteered in the Fiscal Department at the Butler VA Medical Center. In the late 1990’s I joined PVA and elected to participate in their recreation program.

While serving as a member of Keystone PVA I have held many positions. They include Board member, Sports Director and Treasurer from 2000 thru 2005 and Vice President from 2005 until the present.

I volunteer over 1,000 hours annually at the Butler VA and Keystone PVA.

We use cookies on our website to give you the most relevant experience by remembering your preferences and repeat visits. By clicking “Accept All”, you consent to the use of ALL the cookies. However, you may visit "Cookie Settings" to provide a controlled consent.
Cookie SettingsAccept All
Manage consent

This website uses cookies to improve your experience while you navigate through the website. Out of these, the cookies that are categorized as necessary are stored on your browser as they are essential for the working of basic functionalities of the website. We also use third-party cookies that help us analyze and understand how you use this website. These cookies will be stored in your browser only with your consent. You also have the option to opt-out of these cookies. But opting out of some of these cookies may affect your browsing experience.
Necessary Always Enabled
Necessary cookies are absolutely essential for the website to function properly. These cookies ensure basic functionalities and security features of the website, anonymously.
Functional
Functional cookies help to perform certain functionalities like sharing the content of the website on social media platforms, collect feedbacks, and other third-party features.
Performance
Performance cookies are used to understand and analyze the key performance indexes of the website which helps in delivering a better user experience for the visitors.
Analytics
Analytical cookies are used to understand how visitors interact with the website. These cookies help provide information on metrics the number of visitors, bounce rate, traffic source, etc.
Advertisement
Advertisement cookies are used to provide visitors with relevant ads and marketing campaigns. These cookies track visitors across websites and collect information to provide customized ads.
Others
Other uncategorized cookies are those that are being analyzed and have not been classified into a category as yet.
SAVE & ACCEPT
This website uses cookies to improve your experience. We'll assume you accept this policy as long as you are using this websiteAcceptView Policy
English
English Español de México