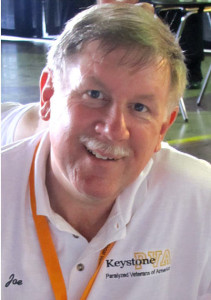 Joe went to work for the Keystone Chapter of the Paralyzed Veterans of America in April 2005 as only its second executive director since the chapter’s founding in 1960. (Joe Kiren, in the 1990s, was the first.) Since then, he has supported, initiated, or convinced the chapter to expand its reach into the business and civic communities in Pennsylvania, where the Paralyzed Veterans have experienced growing support for its mission and its modest financial needs. The chapter is a charter member of the Greater Pittsburgh Nonprofit Partnership, on whose Public Policy Committee Joe serves. To stay visible and engaged in the community, the chapter has memberships and representatives on civic, business, and veterans support organizations across Pennsylvania. Joe supported the revision of PVA’s Chapter Hospital Liaison program, beginning with arranging for a meeting among the PVA’s top national officers and chapter leaders in 2010, and renewed training for HLOs in 2011. Since then, the Keystone Chapter’s HLO program has consistently turned in detailed and timely reports on how veterans are being treated in VA medical centers in Pennsylvania, and has prompted these VAMCs to make improvements in operations and facilities for all vets.

Joe supported and sometimes initiated expansions of the chapter’s recreation programs. Following his involvement in the National Veterans Wheelchair Games in Pittsburgh in August 2011, he prompted a review of the partnership relationship between the PVA and its chapters and the VA, the latter being the nominal sponsor for the Games, a review that resulted in a formal set of initial guidelines for host chapters, approved by the PVA Board of Directors May 2016.  In partnership with PVA’s Shooting Sports program, he initiated the chapter’s participation in the PVA Trap Shoot Circuit, holding its first event in the Pittsburgh region in September 2013.

Joe’s first assignment for the chapter in 2005 was to move its headquarters offices into premises that had been acquired shortly before he went on the job. He arranged for contractors to make modifications to the building and parking lot that made it Americans with Disabilities Act (ADA) compliant, as well as making or arranging for the installation of equipment and the move itself to Sharpsburg, 20 miles from the previous location near Bridgeville and much closer to the VA Pittsburgh HealthCare System’s campuses. He remains the overseer of the building’s operations and maintenance.

Joe had 20 years experience as a nonprofit organization manager, mostly with chambers of commerce, small foundations and economic development organizations when he went to work for the Keystone Paralyzed Veterans. The most strking difference between the Boards of Directors he had worked for and the Paralyzed Veterans was how much of the organization’s work was done by the veterans themselves. They visited the hospitals to monitor conditions, organized recreation events, and did much of the chapter administration, such as the financial accounting.

Joe has been a member of the PVA Association of Chapter Executive Directors (ACED) since his first year on the job with the Keystone Chapter. The ACED develops professional skills and shares best practices among PVA chapter executives. Joe currently serves as the association’s treasurer.

Among many professional development programs that he has both organized and participated in, Joe is a graduate of the U.S. Chamber of Commerce Education Foundation’s Institute for Organization Management and Penn State University’s Economic Development Course.

Joe is a Navy veteran of six years. He was trained to operate, test and maintain naval nuclear power plants and served in those capacities aboard the USS Bainbridge (CGN-25), with deployments in the Pacific and Indian Oceans. The Bainbridge’s most notable service during Joe’s enlistment from 1974 to 1980 was as part of the task force that responded to the taking of the American embassy hostages in Teheran, Iran, in November 1979. The Bainbridge set a ship’s endurance record of 91 continuous days at sea while it was deployed to the Arabian Sea.

Upon his honorable discharge in May 1980 in San Diego, he returned to Clarion, Pennsylvania, where his mother and father still live. He assisted his father with his business and began coursework at Clarion State College, finishing with a degree in communications in May 1984, the year CSC became Clarion University of Pennsylvania. During his college work he was also employed full time as a reporter and photographer for the Leader-Vindicator newspaper in nearby New Bethlehem. The college and newspaper work supported his application to become the executive director of the Clarion Area Chamber of Commerce, where he worked for three years. He followed that with work at the Mon-Yough and Airport Area Chambers of Commerce and the Airport Area Development Council through 2004.

Joe is very proud to serve alongside his fellow veterans. He believes that the Paralyzed Veterans of America has been enormously successful in promoting and achieving rights and services for veterans, with and without spinal cord dysfunctions, and for a much broader disability community, despite the fact that PVA and its 34 chapters nationwide are a relatively small and often obscure veterans service organization. He also is certain that PVA can be even more influential as the public learns more about what its own veterans do (read the Five Facts Flyer issued by the Keystone Chapter). PVA members leave no man or woman behind.

Joe has been married to Sylvett, a registered nurse, since 2005.  They reside in Penn Hills, a community just east of Pittsburgh.