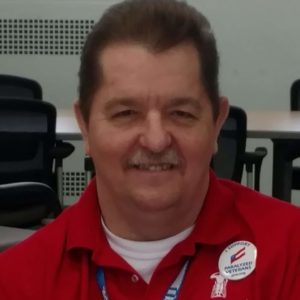 I joined the Air Force at age 18. After basic training I was stationed at Edwards Air Force Base, where I served as an aircraft machinist starting in 1983. In 1986 I was involved in an automobile accident that broke my neck, resulting in my becoming a paraplegic.

After several major surgeries and about four to five months of rigorous rehabilitation to stabilize me, I returned to Pennsylvania to complete many years of physical and occupational therapy. I still do physical therapy to keep me in shape and active.

I joined the Paralyzed Veterans of America in the early 1990s when I was approached by a Keystone Chapter member and that’s when I joined the chapter and became active. I am involved in all types of sports and recreation programs whether it be local, state, or at the national level, such as the National Veterans Wheelchair Games, for the past ten years, where I’ve been awarded with many medals and awards for my efforts.

I’ve served as the chapter’s Deputy Representative of the VA Volunteer Services program at the James E. Van Zandt VA Medical Center in Altoona, Pa. for many years, and I am now the primary Representative. I also am a member of the Patients Centered Care Committee and the Veterans Advisory Council at the Altoona VAMC. I’ve been a regular volunteer at the Altoona VAMC for almost ten years and have been acknowledged with many pins, certificates and awards for my hours of dedication to veterans for my efforts.

I want to give back to my fellow veterans as much as possible, because Paralyzed Veterans and the VA were there when I needed help and they still continue to meet my needs. I am honored to be part of this fine organization and love to help with my fellow veterans in any way that I can.

We use cookies on our website to give you the most relevant experience by remembering your preferences and repeat visits. By clicking “Accept All”, you consent to the use of ALL the cookies. However, you may visit "Cookie Settings" to provide a controlled consent.
Cookie SettingsAccept All
Manage consent

This website uses cookies to improve your experience while you navigate through the website. Out of these, the cookies that are categorized as necessary are stored on your browser as they are essential for the working of basic functionalities of the website. We also use third-party cookies that help us analyze and understand how you use this website. These cookies will be stored in your browser only with your consent. You also have the option to opt-out of these cookies. But opting out of some of these cookies may affect your browsing experience.
Necessary Always Enabled
Necessary cookies are absolutely essential for the website to function properly. These cookies ensure basic functionalities and security features of the website, anonymously.
Functional
Functional cookies help to perform certain functionalities like sharing the content of the website on social media platforms, collect feedbacks, and other third-party features.
Performance
Performance cookies are used to understand and analyze the key performance indexes of the website which helps in delivering a better user experience for the visitors.
Analytics
Analytical cookies are used to understand how visitors interact with the website. These cookies help provide information on metrics the number of visitors, bounce rate, traffic source, etc.
Advertisement
Advertisement cookies are used to provide visitors with relevant ads and marketing campaigns. These cookies track visitors across websites and collect information to provide customized ads.
Others
Other uncategorized cookies are those that are being analyzed and have not been classified into a category as yet.
SAVE & ACCEPT
This website uses cookies to improve your experience. We'll assume you accept this policy as long as you are using this websiteAcceptView Policy
English
English Español de México